HOW CROWD FUNDING IS CHANGING THE INVESTMENT LANDSCAPE

6 THINGS TO CONSIDER BEFORE GOING FOR INVESTMENT

MOVIES ON THE LAWN (entertainment)

HOW CROWD FUNDING IS CHANGING THE INVESTMENT LANDSCAPE

“I keep having this recurring thought: what if people came together to form a type of crowd wisdom?” ~Hong Sin Kwek

Crowd Wisdom? Yes, the terminology is as new to me as it is to you. But after asking Hong Sin to elaborate, I understand Crowd Wisdom to be a type of ‘power in numbers’ philosophy where ideas, industries and production are democratised to a point where they are driven directly by the general public. What does that mean exactly? It’s an approach where everything is crowd sourced: Skills. Funding. Property. Ideas.

Imagine that. Imagine a world where everything is created by mass collaboration and mass interest; where money and ideas only follow the flow of pledged collective demand. Wouldn’t that save a damn lot of time and effort, and perhaps the misuse of funds!

Pioneering this ideology is Hong Sin Kwek, a former cyber security business developer turned managing director of her start up Phoenixict; a company which focuses on developing the new found “crowd economy.”

The match is an unlikely one. Hong Sin “chanced upon” crowdfunding after being rejected by venture capitalists while starting her business.

“When I heard about crowd funding I thought it was too good to be true. They told me I could pitch my idea to the public on a crowd funding platform or event, and if people liked the idea, they’d contribute to it.”

To find out just how deep the crowd funding scene really goes, Hong Sin travelled to San Diego, Silicon Valley, Las Vegas and met the biggest influencers in crowd funding, noting the impact it had on the regional economy and startups across the United States.

“I was so amazed by the progress and achievement made in the U.S. But in Asia there are only pockets of platform providers. People aren’t really crowd funding, whereas in the U.S. it’s really taken off. I went to the U.S to get money, but I left back wanting to drive Asia crowd funding, and to launch the Crowd funding Asia summit.”

Crowd funding is an accessible and low-risk approach to fundraising; it simultaneously gets you directly in front of your target audience (if used with savvy, on the right platform) while testing the market viability of your idea. If people like your idea they’ll fund it directly. If not, well, that’s feedback, isn’t it? Crowd funding is becoming a safe bet before going for investment.

Recovering from a tough divorce, Hong Sin’s business is a type of ‘starting all over again” venture, but this time perhaps with bigger vision and more gumption. The mother of two will ran the first ever Crowd funding Asia summit as she turned 50 in August. She’s all in with her start up, deciding to “do something for myself for once.”

Driving Hong Sin’s vision is the intention is to help people and the crowd economy to reach new heights – empowering people to reach their dreams through a new support system. Simply, she see’s crowd wisdom as a means to serve the community and grow the entrepreneurial ecosystem.

“It’s challenging, very tough; but I believe in it. When I started in cyber security people laughed at me, but today it’s a must. I believe crowd funding will be that way – especially industries turning to scarcity, like water and other critical industries.”

Hong Sin believes there are misconceptions about the relevance of crowd funding to everyday businesses – but there’s more to it than meets the eye, she says. Part of her mission is to build awareness and to develop a holistic approach the future crowd economy and information landscape – an infrastructure she calls Crowd Wisdom.

So there you have it. Crowd Wisdom. You heard it here first.

THE DOWNSIDE OF RUNNING YOUR OWN BUSINESS IS THAT YOU HAVE TO MANUFACTURE DISCIPLINE.

There’s no boss breathing down your neck. No office hours.  No looming panic that you’ll lose your job if you don’t fulfil your job description. THERE IS NO JOB DESCRIPTION. If you’re smart, you’ll have a friend, mentor or coach […]
0
Read more

Things are “commercial” when mass culture want to buy them. The focus is sales and profit. That sweet (at times unsavory) bottom-line. Artistry is about the love of creation. Sometimes people buy art, but they buy commercialism more. That’s […]
0
Read more 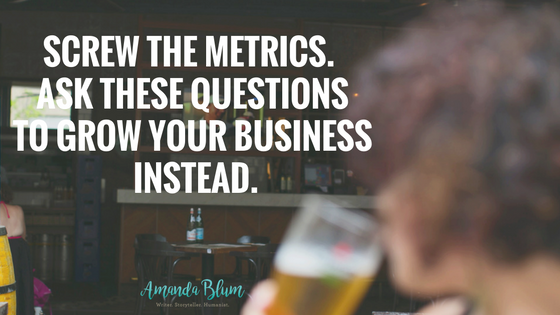 SCREW THE METRICS. ASK THESE Qs TO GROW YOUR BIZ INSTEAD

You’ll thank me. Your clients will thank me. You’ll have more fun and remember why you decided to run a business in the first place. It’s not that metrics aren’t useful. They are. But you know what they also are? […]
0
Read more